Wake up ahead of the curve
Buy now!
DGiT Daily
What’s next for electric motorsport?
DGiT Daily

What’s next for electric motorsport?
Electric vehicles are taking over the world of motorsport and we think we've hit the tipping point. Here are a few predictions for battery powered racing.

By Kris CarlonJul—22—2017 12:00AM EDT
Electric vehicles are taking over the world of motorsport and we think we've hit the tipping point. Here are a few predictions for battery powered racing.
What’s next for electric motorsport?

There’s a real buzz (sorry) in the world of electric motorsport these days. Formula E has led the charge and despite the odd complaint about dull racing, the championship is going from strength to strength. We’re about to get a global motorbike racing championship and there is a touring car series in the works.

So, what is the future of electric motorsport? We’re biased, but we think it’s on the verge of taking over.

The major manufacturers have finally caught on to the electric revolution and there’s every chance that Internal Combustion Engines will bit the dust entirely in 2030. That means that electric cars will leap to the fore much sooner than that and motorsport is always one step ahead of the public road.

So how will electric motorsport develop? We have a few ideas…

It’s the poster child of electric racing, even though it endured a difficult start it has gone on to become a serious championship. So, we’ll start there.

Manufacturers have flocked to Formula E this year and we’ve got the following manufacturers actively competing:

A stronger grid than F1?

BMW will join the grid in 2018, Mercedes-Benz has shown an interest and if this all comes to pass then Formula E will have a stronger manufacturer presence than F1. McLaren is working behind the scenes on the battery supply, too.

Only Venturi, MS Amlin Andretti and Techeetah don’t have manufacturer backing and they might soon be tempted by big money offers to sell their slots on the grid.

A while ago we looked at the steps Formula E needed to take to close the gap on Formula One. It has dealt with most of the technical issues, but the one thing we really thought the series needed to attract was star drivers. We don’t think that’s an issue any more.

We never saw the manufacturers coming in such big numbers. Now they’re here and taking Formula E seriously, the star drivers will come as a matter of course.

We’ve still got a series of ex-F1 drivers duking it out on the street circuits, but we’re pretty sure that the manufacturers are going to bring their own big names for 2018 and the Formula E entry list is going to take a step up. The series is strong and now we need a big name driver to defect from F1. We think now is as good a time as any for that to happen.

F1 is in the doldrums

Formula One has lost the crowd. Complex political machinations behind the scenes, turbo-powered cars that simply aren’t as exciting as the old-school machines, an over reliance on aerodynamics and a period of Mercedes dominance has dampened the enthusiasm for the series.

At the same time, Formula E has got stronger by the month. The new car for next year looks incredible, it will get faster and subtle changes to the street  circuits and format will increase overtaking.

At the start of the year it would have been naïve to suggest Formula E could take over as the biggest single-seater category in the world. Now? It doesn’t seem so far-fetched.

In just a few seasons, Rallycross has usurped the World Rally Championship and now Red Bull will launch an electric rallycross series in 2018. It’s going to be epic and there’s no reason why it has to stay as a support class.

The races are short and action-packed, which works well for battery-powered cars.

Audi has already expressed an interest in building a rallycross car with the electrical equivalent of 800bhp and Formula E has provided the blueprint. This series is going to work.

The Electric GT Championship looked a little rough around the edges in the planning stages and it had the slight whiff of a championship that might never actually see the light of day. Now? We’re pretty sure it’s going to happen.

With no factory support, the initial plan was to run a one-make series with the P85D. But, thankfully, that plan has fallen by the wayside. 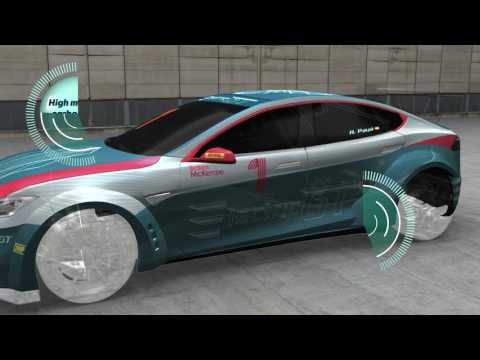 Now the series will use the much faster, range-topping P100D that is 1100lb lighter than the road car. That’s a massive step forward and there’s a much better buzz around the series. The series has also signed up solid drivers, including Le Mans legend Tom Coronel, Alex Premat, Jeroen Bleekemolen.

The season starts in November at Paul Ricard and we cannot wait to see it. Now they’ve got the car right, this could actually challenge Formula E for electric racing supremacy.

Once he sees this series in action, Tesla boss Elon Musk might want to get more involved in the motorsport scene, too. If he does, then the like of the DTM in Germany and BTCC in England would be right to be concerned.

Electric cars have already won the battle in America’s most prestigious hillclimb event. It’s over.

The Race to the Clouds is another time attack format and the 12-mile course means range isn’t an issue. The petrol-powered competition relied on turbos, too, and the high altitude means they simply don’t work as well when the car nears the Colorado summit. An electric car is simply more efficient and doesn’t suffer from altitude sickness.

Rhys Millen destroyed the competition in the e0 PP100 last year, with a winning margin of almost 40s. The only way a petrol car will win this competition again is if all the electric cars break. 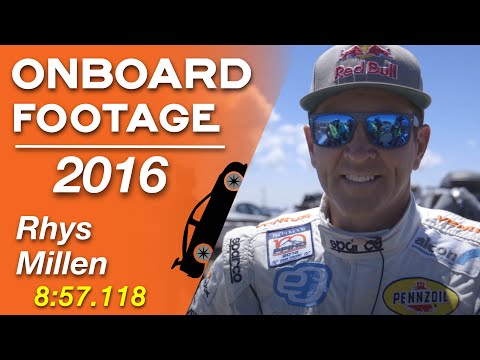 So expect Pike’s Peak to go all-electric, sooner rather than later, as the other teams will simply get sick of losing and they’ll know that electric power is the only way to compete on this unique course.

The National Hot Rod Association recently added EV guidelines to the rulebook and there’s basically no way that electric cars won’t take over the quarter-mile at some point in the near future. As soon as battery packs and motors provide more power than the Methanol-powered dragsters, the game will be over.

Drag racers only care about the ultimate quarter-mile time, they don’t care where it comes from. Electric motors and battery packs simply cannot match the power output of the leading dragsters right now, but that’s going to change. 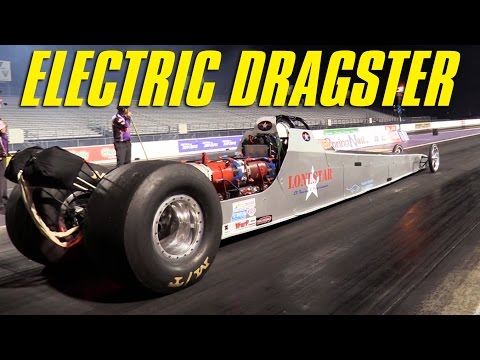 The EV record dates back to 2012, when the Rocket hit 201.37mph at the end of a 6.94s run. Another important factor is the weight of the batteries. They only have to last about seven seconds, but when the car has to drag them down the strip then the weight is a serious factor.

OK, RoboRace was a disaster this year. The planned launch simply did not happen and this is set to be a test season, before the series launches in 2018. But with AI coming on in leaps and bounds, we’re sure it’s going to happen next year. 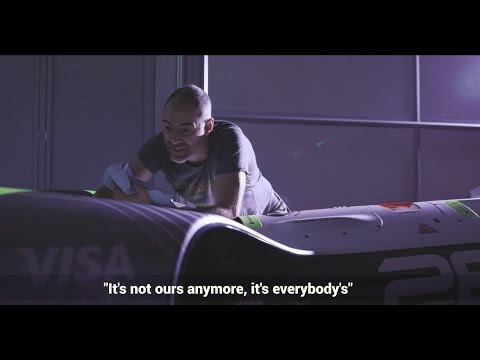 Will it be great? We don’t know that yet, but with manufacturers perfecting their self-driving systems and autonomy hitting the news on a daily basis, we think this is the right time for RoboRace. It will make headlines, we kind of hope there will be some big crashes and we’re fascinated to see what becomes of it.

This is really big news. MotoGP has added an electric class for 2019 and, like Formula E, will go with a one-make formula.

It’s a baby step for arguably the world’s biggest two-wheel motor racing series and the electric support races will be just 10 laps long. They won’t feature at every meeting either and will race at just five tracks to keep the costs under control.

The bikes will only do 124mph (200kph), too, so we’re not expecting miracles from them in the first season. Like Formula E, though, we’re sure they’ll gain speed, momentum and their own following before too long.

We’d like to see an open championship with manufacturers building their own bikes and if that happens within the next two to three years then this support series will be in prime position to take over the main event when the time comes to abandon the Internal Combustion Engine.

We love the TT Zero class at the Isle of Man TT festival. It has fast become one of the biggest electric motorcycle races in the world and we can only see it getting bigger and better until it dislodges the petrol-powered superbikes at the head of the pack. 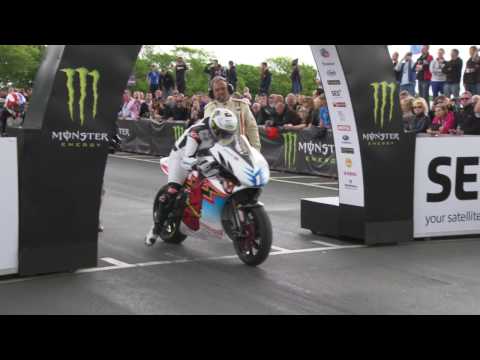 The format is perfect for an electric motorcycle. A time attack format with one lap of the 37-mile circuit means there’s no range anxiety and the manufacturers could focus on performance. The fastest lap rose from 96mph in 2010 to a new electric speed record of 119.279mph, which was actually set in 2015. We  think that record will fall, the bikes will keep getting better and they will take over the show within five years.

Alta Motors made its competition debut in the Red Bull Straight Rhythm event with the Redshift MX. It was a step into the unknown, but factory racer Josh Hill made the semi-final of the brutal knockout competition against the best riders and 250cc bikes in the world. 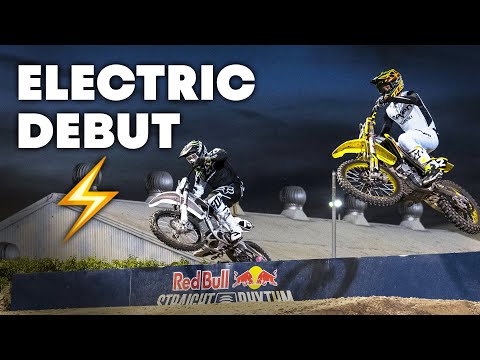 We expect the Alta Motors Redshift MX to become a fixture in these kinds of events and there’s no reason why we can’t have an electric Motocross championship in the next two years. Red Bull is into the bike, it’s a crowdpleaser and that’s really all it takes to get the ball rolling.

Why don’t we have an electric powerboat championship already? Honestly, it’s a bit of a mystery, but it’s a problem we  have the solution for.

BUND Holding Group recently unveiled the CHINA BUND Electric Integrated Propulsion System [EIPS] marine engine. It’s a work in progress, but it’s on the way. If it can outperform the 2200bhp F1 powerboats that currently rule the roost, then it will simply take over one of the lesser known, but most advanced, forms of motorsport.

Here are the ICE Boats in action and we can’t wait until battery power takes a tilt at the title. 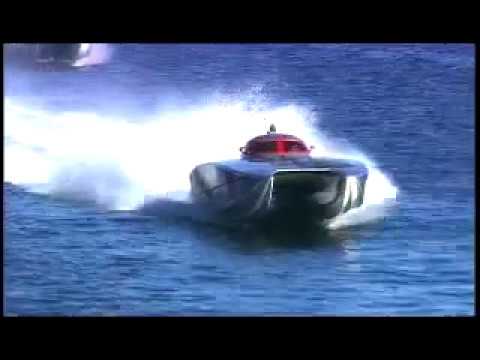 What electric motorsport competition do you look forward to?

Here are some tips and tricks to get your Netflix working again
SoundGuysSep—20—2020 12:00AM EDT