Swagcycle electric bike: you’ll look ridiculous, but you can’t beat the convenience
The Swagtron Swagcycle is a compact foldable bicycle that can go up to 15 miles per hour and has a range of up to 15 miles on a single charge.

By Kris CarlonAug—03—2017 12:00AM EDT
The Swagtron Swagcycle is a compact foldable bicycle that can go up to 15 miles per hour and has a range of up to 15 miles on a single charge.
Swagcycle electric bike: you’ll look ridiculous, but you can’t beat the convenience 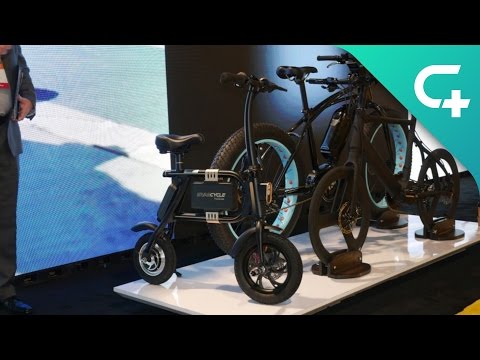 Over the last couple of years there has been an absolute explosion in the amount of electric-assisted hardware available on the market. The industry has taken a number of things that have traditionally been human powered, and added an electric element that gives users a boost when they need it. Whether it’s skateboards, cars, or bicycles, there seem to be new innovations popping up every day in the space.

There are 3 different options to choose from when you buy an electric bike from Swagtron, but we decided to focus on their fordable “Swagcycle E-Bike”, as it is both the most affordable as well as the most portable of the lot.

The Swagcycle E-Bike uses a 36 volt lithium ion battery that the company says can push the bike up to 15 miles per hour and has a range of up to 15 miles on a single charge. This essentially means that you should be able to ride the bike for an hour or so before you need some more juice, give you aren’t using the built in headlight or microUSB port to charge up external devices. The company says it should take about 2.5 to 4 hours to charge up the bike, which obviously isn’t instant, but should be okay assuming you’re not driving using it multiple times a day. For a simple commuter device it should do just fine.

The bike can fold into a variety of positions, which should help it to fit into cars, trunks, or wherever you need to store it. It is also apparently IP54 water resistant, meaning while you probably shouldn’t use this in the pouring rain, misty days or a light drizzle should be completely fine. We do recommend covering the exposed microUSB port if this is the case, however.

It was pretty difficult to ride the bike on the show floor, mostly because it had a ton of kick to it. Twisting the throttle on the handle bars made the bike want to go speeding off immediately, and as you can see in the video, I had to slow down over and over again in order to not crash into the loads of onlooking bystanders. Obviously the bike would slow down when coasting down the road, but we didn’t exactly have an ideal environment to see how it rides otherwise.

The bike was surprisingly easy to stay stable on however, and while going at a moderate speed, one would likely be able to stay completely balanced pretty easily. Though you do tend to look a bit silly with your knees so high in the air riding this thing, if it gets the job done, that’s what’s important.

Read next: Great electric scooters, including some options from Swagtron

Would you be interested in a bike like this? You can’t deny it is insanely portable, and for only $399, it is an enticing product. You can pick it up at Swagtron.com.

Our guide to electric cars, scooters, mopeds and more

Uber steps into bike sharing with purchase of Jump

Uber bike sharing is only available in San Francisco, but it may expand to more cities soon.
Adam DoudApr—09—2018 12:00AM EDT

We think that e-bikes are going to take off in a big way and here are 10 of the very best electric bikes on the market right now.
Edgar CervantesFeb—27—2018 12:00AM EST

Will an electric motorcycle save Harley Davidson?

A symbol of freedom and power, Harley Davidson was founded in Milwaukee in 1903. Fast-forward 115 years and now it appears it's time to join the electric vehicle industry. Is it for the ...
Edgar CervantesFeb—02—2018 12:00AM EST