Wake up ahead of the curve
Buy now!
DGiT Daily
Sneaky smart security camera doubles as a lightbulb
DGiT Daily

Sneaky smart security camera doubles as a lightbulb
Or is it the other way around?

By Adam DoudMar—14—2018 12:00AM EDT
Or is it the other way around?
Sneaky smart security camera doubles as a lightbulb 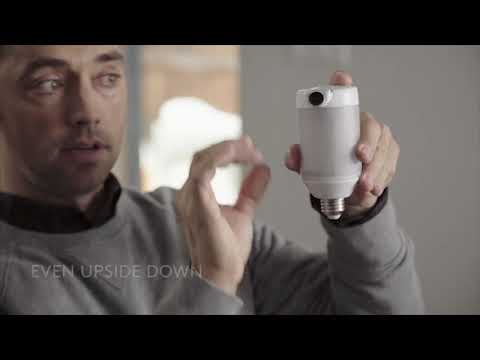 The idea is simple — you simply plug in the lightbulb, download the app, and scan a QR code so it recognizes your device. From there you connect it to your Wi-Fi network. That’s it!

The LightCam features a 1080p camera with infrared sensors that allow it to “see” up to 25 feet in the dark. What’s cool about the camera fixture is that it can extend downwards, outwards, and retract, as well as swivel 360 degrees, so you can get the full view. Everything is streamed directly to your app, of course. Through that app, you can program it like any other smart light to turn on and off during certain times and scenarios, such as when the motion sensor picks up movement.

Additionally, the camera has a MicroSD card with secure encrypted storage, and you can back up for footage (up to a week’s worth) to various cloud services or to your phone. It comes equipped with a built-in speaker and microphone, although the idea of someone talking into a lightbulb is kinda hilarious. And best of all the LightCam is weatherproof, “rated for Minnesota Winters and Georgia Summers.”

In development since 2016, the LightCam was launched as an Indiegogo campaign just a couple months ago with a prototype built back in August. Since the campaign started, creator Daniel Swiss has reached 1,214% of his goal, with just under two weeks to go as of the time this was written. For early birds, you can catch one for just $109, or two for $200, with discounts extending the more you pledge for. It plans to retail for $179 per bulb, and expects to ship in August of 2018.

Lifx vs. Hue: your guide to the best smart lighting

Lifx guide: Everything you need to know

In this post we aim to give you the full Lifx rundown and help you make a smarter decision. Should you go with something more available like Philips Hue, cheaper like Sengled, or is ...
Edgar CervantesMay—25—2018 12:00AM EDT

Philips Hue guide: Everything you need to know

We have taken it upon ourselves to make a comprehensive Philips Hue guide to help you get that smart home set up and ready to go.
Edgar CervantesMay—22—2018 12:00AM EDT