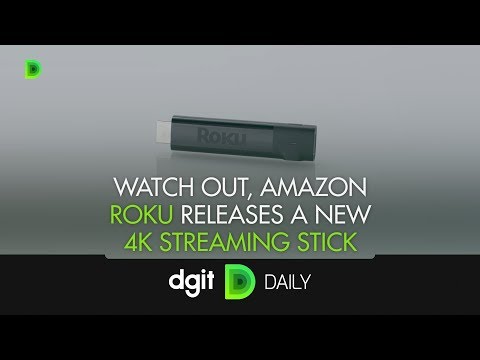 If you’re looking for a 4K media streaming device but aren’t thrilled about Amazon’s new products, there’s now an alternative that you’ll definitely want to check out. Roku has just unveiled a new 4K- and HDR-compatible Streaming Stick Plus (styled Streaming Stick+) to compete with Amazon’s Fire TV.

The new device will offer up to four times the wireless range of its predecessors, and also comes with Roku’s new voice remote. It can be yours for just $70.

The Roku Streaming Stick Plus may be the biggest competitor to Amazon’s newly-launched Fire TV dongle, which is also 4K and HDR compatible. The big difference between the two is that the Fire TV has Alexa built-in, whereas the Roku device doesn’t come with a voice assistant.

Also read: 4 things to consider before buying a 4K TV

Two new budget streaming sticks: If you’re looking for a new media streaming device on the cheap, perhaps Roku’s new Express or Express Plus will fit the bill. These new devices are going for $30 and $40, respectively, and offer around five times the speed of their predecessors. The Express Plus can also work with older TVs thanks to its A/V port compatibility.

These are perfect for adding more Roku devices to TVs around your house.

Older Roku devices are now a better value: Roku is also bringing more value to its older streaming devices. The 4K- and HDR-compatible Roku Ultra is receiving a price cut to just $100, and the company’s $50 Streaming Stick now comes with a voice remote.

All of these new Roku devices are available for pre-order now and will begin shipping October 8. Note that the Roku Express Plus is only available at Walmart, however.

Common Roku problems and how to fix them

We take a look at some of the common problems faced by owners of Roku devices, and offer potential solutions on how to fix them!
DGiTJul—18—2020 12:00AM EDT

Roku remote not working? Here are some possible fixes

Issues with the Roku remote are annoying but should easily be solved. Here's a list of possible solutions.
Andrew GrushJun—22—2020 12:00AM EDT

How to set up and use Google Home Roku controls

Goiogle Home and Google Assistant can power your Roku watching experience with the help of a third party app. Here's how to set up Google Home Roku controls using the app Quick Remote.
DGiTMay—23—2018 12:00AM EDT

Best media streaming players – which is right for you?

Not only are there tons of streaming media devices, there are several different platforms to choose from. But which one is the best for you?
DGiTFeb—10—2018 12:00AM EST