Everything you need to know about the Rimac Concept One
Rimac Concept One: Get the facts, figures and the lowdown on the all-electric hypercar that changed the world and threw down the gauntlet to Bugatti.

By Nick HallAug—08—2017 12:00AM EDT
Rimac Concept One: Get the facts, figures and the lowdown on the all-electric hypercar that changed the world and threw down the gauntlet to Bugatti.
Everything you need to know about the Rimac Concept One

The Rimac Concept One is a car that will go down as a landmark in the world of electric cars. It’s the first all-electric hypercar, it’s effectively the Bugatti of the zero emissions world and it’s the new benchmark for clean performance.

It’s all quite remarkable for a car that we really didn’t expect to make it at all.

The Rimac Concept One had all the hallmarks of vaporware. Rimac is a small company in Croatia, not a major car brand. The car had ridiculous levels of horsepower and technology, too, that the major manufacturers claimed was years away. We’ve all read those press releases for unicorn cars with a knowing smile.

The concept then toured the motorshows for years before it actually turned a wheel and every test drive request met with polite deflection.

The industry was laughing at Mate Rimac. It isn’t laughing anymore.

This is arguably the car the Bugatti Chiron should have been. It’s a quantum leap forward in tech, design, user interface and more. It’s a hypercar for the Playstation generation and it deserves its place in the EV Hall of Fame.

Here is everything you need to know about the Rimac Concept One.

Mate Rimac has been working on electric cars since 2009, when he installed a 600bhp electric motor into an ancient 1984 BMW E30. He went on to set a series of acceleration records with the car, built more to sell and then set to work on the first all-electric hypercar.

Technically the price is $980,000, but we’re quoting $1 million for convenience and the fact that not one single customer has spent less than that. Rimac builds a boutique car, so it can make what you want if your pockets are deep enough.

Once you’re into a car for around $1 million, it’s only natural to put a few personal touches on it. That costs money.

Like Pagani, Rimac will create the car of your dreams and the only limit is your imagination and your budget. So the car might cost about $1 million, but we wouldn’t be surprised if one rolls off the line costing triple that.

The Rimac is an exquisite looking thing and that is thanks largely to its simplicity. Modern hypercars like the McLaren P1 and LaFerrari are fussy and full of swooping details and winglets. The Rimac is clean, fuss free and smooth.

Adriano Mudri designed the exterior and he did a stunning job. It isn’t a small car, the battery packs created their own packaging issues, but it’s a tight design and every detail is perfect. The carbon-fiber actually looks expensive, it’s that well finished.

That fluted side gives it just the right amount of attitude at the side and the end result is an understated hypercar with sculpted, muscular lines. It’s smooth, because an electric motor doesn’t need vents and air to breathe, it’s modern and it’s slick. We love this design and it simply won’t date.

The rear end is fluted, long and the design all works to optically lower the car. The Ford GT40 got its name because it was 40 inches tall. The Rimac Concept One is 47.2 inches high, but you’d never think that by looking at the pictures.

As for the back, it’s smooth and the LED lights give it a high-tech feel. There’s no rear window, which is weird, but then if you’ve got something behind you then you’re really not trying hard enough.

Under the skin, the clever touches continue. Audi has proudly revealed the T-shaped battery pack on its R8 e-tron concept, but Rimac had this a long time ago and have 8450 Lithium Ion cells in its 82kWh spine.

A motor, inverter and gearbox for each wheel? Yes, the Rimac is already running this. Advanced touchscreen controls for the whole car? Yup, the Croatians built a system in-house that makes the likes of Audi, Mercedes and BMW look like rank amateurs.

The Rimac Concept One comes with 811kW of power. That’s 1088bhp and then there’s also 1200lb/ft of torque to contend with. That is an almighty amount of power and the rest of the world said it just couldn’t be done.

That’s why the world needs pioneers like Mate Rimac. He set about producing separate electric motors to power each wheel and then linking them together with the software. This is a big deal.

Rimac has developed its own motors for sale in the wider world, this goes well beyond a car, but it also produced an advanced All Wheel Torque Vectoring System that makes traditional traction control look positively stone-aged.

You see creating power is easy. Putting it down to the road through the tire is the hard part. Sensors monitor the wheels and make calculations every fraction of a second so that every wheel gets just as much power as it can take. Then the central hardware makes it all work as one cohesive unit to blast the Rimac down the road.

Technically, as soon as Tesla backs up its bold claims for the Tesla Model S P100D, the Rimac Concept One will lose its title as the fastest accelerating electric car in the world. Well, the fastest electric car from 0-60mph in any case.

It has a trick up its sleeve to deal with that and the Rimac will still take the Tesla to pieces over a longer distance, but for now the Croatians can still point to the fact that its car decimates a LaFerrari off the line. It has the video to prove it. 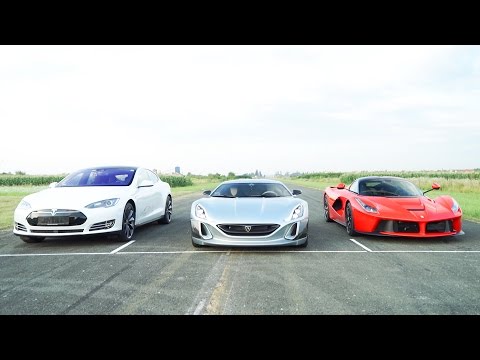 The Concept One hits 60mph in 2.6s, according to Rimac’s own figures, which is 0.1s slower than the Tesla Model S P100D. Now we want to see these cars on the strip together before we even call this one, because Rimac could easily be conservative on its numbers.

But when the speed starts to grow, we’re still sure that the Rimac will assert its authority. That horsepower will start to show and at higher speeds the car can deploy all of that outrageous power reserve through the rubber without the computers holding it back.

That’s why it hits 125mph in 6.2s and 185mph in 14.2s. That is insane. Stretch this car’s legs on the public road and you’re probably going to jail. There are no gears to worry about, just forward motion, so there’s barely any let up until it starts to close in on the top speed.

The Rimac Concept One is one of the fastest cars in the world. It’s really that simple. Forget electric, forget zero emissions, forget every caveat you can think of. This, right here, is a rocket.

The Rimac Concept One top speed has risen gradually from 190mph and it now sits at 221mph. Only a handful of cars have ever gone faster and they include the Bugatti Chiron and the Koenigsegg Agera A. In terms of pure electric cars, this is the fastest production car we’ve ever seen.

The Rimac Concept One weighs 4080lb, which is heavy and yet not outlandish. The LaFerrari weighs in at 3724lb and the McLaren P1 is a 3411lb car. The Rimac is more powerful than both, it carries most of the weight low down in the frame and it’s a four-wheel-drive car.

It has another cunning trick up its sleeve, too. You can trim the Rimac to your exact specification, from safe and predictable understeer to full-on, rear drive style oversteer.

When you get to cars in this stratosphere there really isn’t much to compare the Rimac, too. In fact, we can only really look to Bugatti and Koenigsegg. Each car has its own unique touches and the Bugatti might just be the prettiest, but the Rimac is every bit as good in its own way.

Like the Tesla, it centers around touchscreen technology that gives an insane level of control. You can trim the handling and mess with the power levels for a start. It also comes with access to the In Car Entertainment, the air con and just about everything else. It also functions as a data-logging system if you take your car on the track.

Elsewhere, the Rimac is a supremely clean and minimalist design. The seats are perfectly stitched sports seats, the steering wheel has elegant chromed inserts and the separate screen for the instrument binnacle is clothed in a perfect leather-clad dashboard.

It’s simple in there, deliberately so, and it’s more elegant because of that.

With all that explosive performance and its specialist existence at the head table of the hypercar world, you could forgive the Rimac for having the kind of paltry range you find with lesser cars. You don’t have to.

The Rimac Concept One has a 310-mile range. Yes, you read that right. Now the Rimac is made in such small numbers that it isn’t subject to the same EPA-style tests as the big players. So you might need to adjust those figures slightly if you’re trying to do a real comparison with the likes of Tesla.

It also won’t return that kind of range if you hammer it. But turn down the wick and it will give you unreasonable range for a car of this caliber. We’re looking for a chink in the armor, but it’s really not there.

Think the Bugatti Chiron is exclusive? It has nothing on this car. The Rimac Concept One is limited to just eight units and six have already been sold. So even if you’ve got $1 million then there’s no guarantee you’ll get one of the most advanced electric hypercars ever made. First World problems eh…

Rimac Concept S is coming next

If you think the Concept One is special, then hold on to your hats. The Concept S is coming and it’s faster, stronger and even more insane. That’s the follow up and it’s in development, but get ready for a 1032kW (1384bhp) monster. It will do 227mph, the 0-60mph time of 2.5s is enough to singe your eyebrows and really only the Bugatti Chiron will better it at that point, in some ways.

Is it the last in the line? Almost certainly no. There’s going to be a faster one after that and Rimac could develop this car into a world beater on every level.

When the news broke of the Rimac Concept One, the world raised an eyebrow, wrote Mate Rimac off as a nutbag and went about their business. Now, we have to give the man his dues. He has created a car that Bugatti could easily have unveiled as the replacement for the Veyron in a small factory in Croatia. This is a technical tour de force, a demonstration of just what we can achieve with electric power and it’s an almighty car.

You might never see one on the street, but just be glad it’s here.

The best electric motorcycles you can buy right now

Electric motorcycles are making a comeback and here are 10 of the best, fastest and most expensive battery-powered bikes for the public road.
DGiTApr—23—2019 12:00AM EDT

Affordable hybrid cars for every budget: our top 10