Wake up ahead of the curve
Buy now!
Smart Home
LG’s latest trajectory is prioritizing AI in its product lineup
Smart Home

LG’s latest trajectory is prioritizing AI in its product lineup
The AI-based ThinQ platform is LG’s latest ploy into marrying artificial intelligence with its lineup of consumer technology.

By DGiTJan—12—2018 12:00AM EST
The AI-based ThinQ platform is LG’s latest ploy into marrying artificial intelligence with its lineup of consumer technology.
LG’s latest trajectory is prioritizing AI in its product lineup 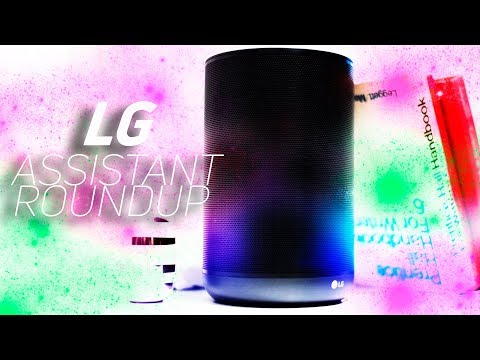 Artificial intelligence has undoubtedly been one of the hottest buzzwords on the CES 2018 show floor, and LG is certainly leaning into the trend.

The South Korean company spent most of its press conference emphasizing the benefits of its new ThinQ platform, which fuels everything from LG appliances to its LG Tone wireless headphones. Originally announced back in December, a majority of the ThinQ lineup of products come with either Google Assistant or Amazon Alexa baked inside.

We had a chance to play with some of the ThinQ marquee products and appliances on the CES convention center floor. Nothing that what we used felt like a gimmick. If anything, this new lineup feels like a step forward for LG, a company that has often struggled to differentiate itself from its competitors. Rather than reinvent the wheel and try its hand with its proprietary digital assistant—cough, Samsung Bixby, cough—the company partnered with the likes of Amazon and Google to launch a line of products that are quintessentially LG with just a bit of AI infused inside.

A fridge so smart it can turn off your lights

Leave messages for the fam on the Instaview Fridge.

Who doesn’t like the idea of a fridge that talks back? (Probably plenty of people, but surely we can admit it’s kind of cool that we can do that in this day and age. Right?)

This refrigerator runs on the power of the ThinQ platform and Amazon Alexa. It does all the neat stuff that a smart fridge can do; it has cameras inside each main compartment to show you how much of what is left, for instance, and an interactive display panel, which you can use to leave virtual messages for other members of the family.

The big kicker about the ThinQ Fridge is that it’s also a smart home controller.

But the big kicker about the ThinQ Fridge is that it’s also a smart home controller. You can use Alexa to control the connected appliances in your house, and other IoT flairs like connected bulbs and switches. Alexa is pretty good at hearing you, too, and though the CES show floor makes it hard to gauge the responsiveness of a virtual assistant, I like that it offers the same functionality as the Amazon Echo I have at home.

The LG ThinQ speaker is, essentially, a louder Google Home.

If you’ve been following Google Assistant’s trajectory into the home, then you know that the Home and Home Mini have been quite on-trend since entering the market. LG is gunning for the same spot on your shelf with its ThinQ speaker. It works similar to other speakers with Assistant inside. It takes commands, plays music in Hi-fi, and offers a voice-activated interface for LG’s other smart home appliances.

A smart speaker with a display

The ThinQ View can even show you a live view of your Nest security camera.

If you’d rather get something with a screen, Google introduced LG’s ThinQ View, which is part of the new lineup of Assistant-equipped smart displays. The touch-enabled speaker has an 8-inch display with a front-facing camera for Duo video calls. It also offers Chromecast capabilities so that you can stream content directly to the device from your smartphone.

Translate languages in real time with the LG Tone Platinum SE with Google Assistant inside.

The LG Tone wireless headsets are some of the most comfortable all-day headphones on the market. It’s even better with the power of Assistant inside, since it can translate several languages in real time. All you have to do is press a button, speak your phrase, and Google will guide you through the translation. There’s also a reverse translation if you don’t understand the person talking to you, or you can merely use Assistant for everything else it does.

An OLED TV that “ThinQs”

It’s not just a smart TV—it’s your entertainment base station, with the power of Assistant built in.

Last, but certainly not least, is an LG-made OLED television with the power of Google Assistant built inside. The upside is that you don’t have to have a smart speaker in your living room to command Netflix or turn off the lights. The TV uses LG’s webOS-based interface, too, which also understands some commands and can help you find content across varying streaming platforms.

To talk to the TV, all you have to do is press a button on the included remote, prompt your assistant, and then shout your command. It worked impeccably, even on the CES show floor, and I was even able to bring up Google Photos of a recent trip to start a slideshow.

Whether you're a student, gamer, business professional, or a creative, there are a ton of amazing laptop choices for you right now. If you need help narrowing down your options, here is ...
Bogdan PetrovanDec—27—2018 12:00AM EST

Meet Oblend, the canna-tech that lit it up at CES 2018

ZTE partners with Qualcomm and Wearsafe on personal security wearables

Why hasn't someone taken computer monitor technology and just put it into something the size of a TV? Now, Asus is looking to do just that.
DGiTJan—10—2018 12:00AM EST