Wake up ahead of the curve
Buy now!
Archives
iPhone 7 vs iPhone 7 Plus: which should you buy?
Archives

By Kris CarlonMay—03—2020 12:00AM EDT
With the new iPhones out, you need to ask yourself: should you buy the iPhone 7 or iPhone 7 Plus, or hold out until next year's 10th anniversary iPhone 8?
iPhone 7 vs iPhone 7 Plus: which should you buy?

If you still really want an iPhone 7, it will still get at least one major iOS update from Apple, so it’s not totally crazy. But it is an older model, and the one key decision next up is size. This iPhone 7 vs iPhone 7 Plus comparison pits the two phones against one another to figure out which is the better option for you.

The first thing you’ll notice when pitting iPhone 7 vs iPhone 7 Plus is that the iPhone 7 units are the exact same size and shape as the iPhone 6s and 6s Plus, so the look, feel and weight haven’t changed much. Both new iPhones are a tiny bit lighter than year’s versions and for the first time for Apple, are also IP 67 water-resistant and dustproof, so keep that in mind. 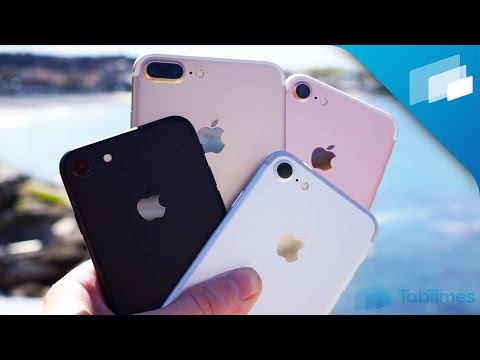 The horizontal antenna band on the back has been removed and the camera bump is now molded out of the same piece of aluminum as the rest of the chassis. It’s hard to say the new iPhones look good, because they just look the same as the last few generations, but if you liked the iPhone 6 and those since you’ll obviously like the iPhone 7.

The removal of the 3.5 mm headphone port (which continued with later iPhone as well) means that both iPhones have a speaker grill on both sides of the lightning connector where last year’s version had a headphone jack. But only the right one emits sound though, the other one hides a microphone. The second stereo speaker is hidden in the earpiece speaker.

Obviously, the main difference between the two new iPhones is size. The iPhone 7 comes in with a 4.7-inch screen while the Plus, as with last year’s iPhone 6s Plus, has a 5.5-inch display. The iPhone 7 Plus is the larger of the two, with a 20 mm height advantage, almost 11 mm wider profile and ever-so-slightly thicker build. Even for those with large paws, it’s not easy to manage one-handed. Being as slippery as it is doesn’t help either, so invest in a case.

What all this means in real life terms is that the iPhone 7 is more of a traditional iPhone size while the Plus variant is a lot more unwieldy. It has to be admitted that Android phone makers have managed to cram the same sized display into much smaller frames. One thing Apple has never done much work on is the large chin and forehead on the iPhone, not to mention those bezels. The drastically updated iPhone SE (2020) retains virtually the same size, too.

The solid state Force Touch home button doesn’t move any more, but it does feel very similar to last year’s version (until the taptic engine kicks in, that is). As far as color options go, the space gray color has been shelved in favor of two new blacks: a matte black and a rare-as-hen’s-teeth jet black. Good luck getting a hold of one of them though.

If you’re clumsy, don’t have particularly big pockets or don’t plan on using your iPhone primarily as a media consumption device, then the iPhone 7 Plus might be a little bit of overkill for you. It’s also a whole 50 grams heavier than the smaller version too – that’s more than 35% heavier if you’re counting. At 188 grams it’s right up there with the heaviest smartphones around.

The good news is that the additional screen real estate and overall size means Apple was able to cram in additional battery in the 7 Plus. The smaller iPhone 7 has a 1,960 mAh (7.45 Wh) cell, compared to 2,900 mAh (11 Wh) in the larger version.

Of course, the higher pixel density on the larger iPhone 7 Plus means it also has more pixels to push around the screen than the smaller iPhone 7. But no matter which iPhone 7 you choose, powering that 25% brighter display from last year is going to take its toll on the battery.

Perhaps more important to note though, is that the new iPhone 7 received a 14.5% larger battery than the iPhone 6s whereas the iPhone 7 Plus only got a 5.5% increase from last year’s Plus version.

This means the difference in battery life between the two iPhone 7s should be significantly decreased this year.

Both new iPhones are rocking the new quad-core Apple A10 Fusion chip (the first time an iPhone has housed a quad-core processor), which should add to their general battery efficiency because the CPU now has options between high performance and low energy cores for less demanding tasks. There’s also a fancy new hexa-core GPU that’s 50% faster than the graphics chip in the 6s.

Interestingly, the iPhone 7 Plus comes with 3 GB of RAM compared to 2 GB in the smaller option. Not that stutters and lag have ever really been a problem with the iPhone, but for better specs then you’re going to want the iPhone 7 Plus.

The other big difference between the iPhone 7 and iPhone 7 Plus is the presence of two cameras on the back of the larger version. No doubt this is one of the contributing factors to the smaller increase in battery size from last year on the iPhone 7 Plus compared to the 7: that extra camera lens had to fit somewhere.

Both new iPhones have a wider aperture than the iPhone 6s (f/1.8 on the main camera, f/2.8 on the zoom lens and f/2.2 on the front-facing camera), have added two LEDs to offer a total of four, added a Flicker Sensor for artificial lighting, gained a new image signal processor.

This year the smaller iPhone gets optical image stabilization along with the Plus variant and both new iPhones have increased the front-facing megapixel count from 5 MP to 7 MP. But let’s compare the 7 and 7 Plus. What will you miss out on if you don’t go for the iPhone 7 Plus? Well, that extra 56 mm f/2.8 zoom lens, that’s what.

The iPhone 7 vs iPhone 7 Plus compare similarly when it comes to the camera. After all, the main camera on both phones is the same – at 28 mm with an f/1.8 aperture. that said, the iPhone 7 Plus has an additional zoom lens at 2x magnification. This means in the camera app you can seamlessly switch from one lens to the other, achieving legitimate 2x optical zoom, without the need for a bulky zoom mechanism.

You’ll also get up to 10x digital zoom and Apple the iPhone 7 Plus can capture depth information on the second lens so you can create artificial Bokeh effects via the iPhone 7 Plus’ software. Bokeh is that lovely blurring of the background you typically only get with expensive and large DSLR cameras.

Price is the other big differentiator between the iPhone 7 and 7 Plus. Both versions come in 32 GB, 128 GB and 356 GB models (with jet black only available in 128 GB or 256 GB capacities), but there’s around a $100 price difference between the large and small iPhone 7s.

So that’s it for our iPhone 7 vs iPhone 7 Plus comparison.

Considering you get all the benefits of that additional zoom lens, a larger battery, larger Full HD screen with higher pixel density and 50% more RAM, the answer here is simple: if you can afford the iPhone 7 Plus and aren’t put off by the additional size and weight, then it is obviously the iPhone 7 you want to have. In all honesty, the size and camera are the only real things that people will care about, besides the price of course.

The iPhone 7 vs iPhone 7 Plus remain fringe options for just getting a cheap device that runs iOS, but folks are likely to be much better off spending a bit more a getting a newer model, if that’s possible based on budgets. In any case, the iPhone 7 Plus, as we keep saying, remains the better options here for many reasons: camera and battery life being just two.