Wake up ahead of the curve
Buy now!
Archives
Apple iPhone 7 / Plus Battery Life – how long does it last?
Archives

Apple iPhone 7 / Plus Battery Life – how long does it last?
The iPhone 7 and iPhone 7 Plus may have smaller batteries than Android phones but just how long do they last? Find out in our iPhone 7 Battery review!

By Nirave GondhiaApr—27—2017 12:00AM EDT
The iPhone 7 and iPhone 7 Plus may have smaller batteries than Android phones but just how long do they last? Find out in our iPhone 7 Battery review!
Apple iPhone 7 / Plus Battery Life – how long does it last?

The iPhone 7 and iPhone 7 Plus may not have the largest battery capacity on the market but as previous iPhones have taught us, the battery life doesn’t always reflect the smaller capacity. In previous years, Apple managed to include a battery that’s on average 30-40% smaller than rival devices but delivered similar battery life to the Android competitions, but what about its latest devices?

Over the past couple of months, we’ve been testing the iPhone with both, regular usage and in-depth testing, so let’s take a look at what you can expect from the iPhone 7 battery and how it compares to the competition.

The iPhone 7 and iPhone 7 Plus are equipped with batteries that are 19% and 5% larger than last year’s iPhone 6S and iPhone 6S Plus at a capacity of 1960mAh and 2900mAh respectively. By way of comparison, the other Android phones we’ll be comparing the iPhone battery against have battery capacities of 2800mAh (LG G5), 3450mAh (Google Pixel XL) and 4000mAh (Huawei Mate 9).

First, the difference between the iPhone 7 and iPhone 7 Plus may seem smaller than the near-50% increase in battery capacity would lead you to believe but this is easily explained by the larger Full HD display.

Comparing the regular iPhone 7 to the LG G5 shows just how good the iPhone 7 battery is comparative to its Android competition, as despite a battery capacity slightly smaller than the larger iPhone 7 Plus, the G5 barely lasts longer than the regular iPhone 7. A larger QHD display on the G5 impacts on battery life but the results certainly show that Apple’s control over hardware and software allows it to eek the maximum out of a smaller battery capacity.

Our second test involves setting the display brightness to 200 nits and using our custom battery test, simulating gameplay continuously until the battery is depleted from 100 percent to completely empty.

Gaming is where iOS seems to have a considerable edge over its Android competition, by offering double – if not more – the battery life that Android smartphones do when gaming. Despite the smallest battery of any of the smartphones used here, the iPhone 7 proves to be a very reliable gaming device and the iPhone 7 Plus gaming battery life seems to top anything else on the market.

While the iPhone 7 and iPhone 7 Plus battery life does seem to last a while, how long does it take to charge when your battery is low? Android smartphones have offered fast charging (in some guise) for several years but not only does Apple not offer it, it only includes a low-output 1A charger in your iPhone box.

How long does the iPhone 7 take to charge using the default charger? Let’s find out:

The results say it all really; the iPhone 7 and iPhone 7 Plus take around 70-90% longer than Android smartphones to charge. Of course, you can always try using a third-party USB charging brick with Fast charging, PowerIQ or your iPad wall charger to speed up charging but if you don’t have one of these, your iPhone will take a long time to charge. 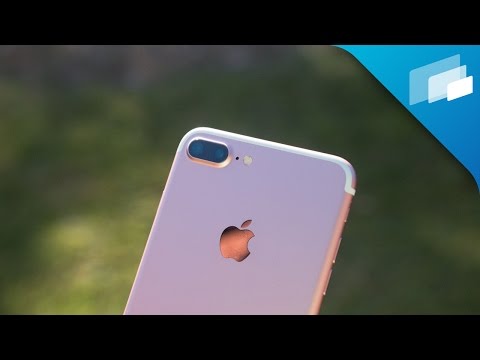 In our battery tests, the iPhone 7 and iPhone 7 Plus certainly perform well but what about in actual usage? After all, not everyone uses their iPhone solely for gaming or web browsing and instead, social media, phone calls, email and more are common daily tasks.

Over the past few months, I’ve noticed a rather interesting trend with the iPhone 7 Plus, and sadly it applies to all smartphones in general. At first, getting through the whole day with a single charge definitely wasn’t an issue but after reaching the storage limits on a 32GB handset, the battery has drastically dropped.

On average, the battery lasts between 12 and 18 hours with around 6-8 hours of usage (this isn’t screen on time as Apple reports usage as both actively using the phone and having apps etc working in the background). As you fill it with more apps and reach the storage limits, you’ll find that this battery life slips to around 10-15 hours with around 5-6 hour of usage.

Overall, the iPhone 7 and iPhone 7 Plus may have one of the smallest batteries sizes (comparatively) on smartphones but as Apple has continuously shown, an arguably-inferior specs list on paper doesn’t mean inferior battery life.

In previous years, the iPhone battery may have just fallen short but now it does seem to be, at least on par with, Android devices. For gamers specifically, the excellent gaming battery life arguably makes the iPhone 7 Plus the best device for mobile gaming.

What do you think of the battery life on your iPhone 7, iPhone 7 Plus or other smartphone? Let us know your views in the comments below!

How to transfer music from a computer to an iPhone

You just ripped music from your CDs to a PC. We show you how to transfer music from a computer to an iPhone.
Sean KingMay—16—2019 12:00AM EDT

Our guide shows you how to authorize a computer on iTunes and de-authorize those you no longer use.
SoundGuysFeb—06—2019 12:00AM EDT

How to get Google Assistant for iPhone

Did you know about these Siri easter eggs?

What does Applecare cover, and is it worth the buy?

When you decide to purchase an Apple device you're also going to be faced with a decision about extra coverage. Should you buy AppleCare?
Andrew GrushJan—02—2019 12:00AM EDT