Wake up ahead of the curve
Buy now!
DGiT Daily
Insta360 One X review – quite possibly the best action cam you can buy
DGiT Daily

Last year’s Insta360 One was considered one of the best 360-degree action cameras you can buy. Hoping to build on this legacy Insta360 has now announced a next-gen model, the Insta360 One X.

The new camera features a redesigned body, a major camera upgrade, and plenty of other refinements. On the surface, the One X is improved in nearly every way. I have been using the Insta360 One X for a few weeks now and while it’s not perfect, there’s a lot to like here. Let’s take a closer look.

The Insta360 One X is about the size of an old-school phone, and with about the same thickness too. It’s rectangular with rounded edges. There are two fish-eye lenses, with one on each side.

There’s also a small circular LCD display on one side which makes it easy to swap between photo and video modes. Below the display are two buttons. The smaller button turns the camera on, and the larger one is used to navigate the settings.

The Insta360 One X is better than its predecessor in every way.

On the rear of the camera is a microSD card slot and a mounting port for selfie sticks, tripods, and other attachments. On the left side, you’ll find a microUSB slot. On the right is a removable battery, hidden behind a hinged door of sorts.

For those familiar with the Insta360 One, you might be wondering about the built-in adapter for attaching the camera directly to your iPhone. Insta360 has ditched this feature with the One X, in favor of using a wireless connection that uses Bluetooth for initial pairing and WiFi for data transfer. Surprisingly, this method is actually faster and more efficient than the older method of direct connection.

The Insta360 One X design isn’t what I’d call sexy, but it’s not meant to be. It’s all about creating a functional and easy to handle device, and Insta360 nailed this aspect.

The Insta360 One X camera package is capable of shooting 360 degree 18 MP images via its F2.0 200-degree wide-angle lens. All images taken with the Insta360 were bright, detailed, and looked good even in low-light conditions. Even in light rain (which it’s been basically non-stop around here) I was able to get some pretty good shots, though obviously, the water droplets got a bit in the way.

The Insta360 One X does a phenomenal job at video and I’d imagine this is the area where it’ll get the most use from consumers.

You can record in up to 5K at 30fps, 4K at 30/50 fps, and 3K at 100fps. Not only does video look great, but the stabilization also works wonderfully. This is important for an action camera, because bad stabilization in an action moment can end up making a video completely unwatchable.

According to Insta360, the secret behind their stabilization is their upgraded FlowState algorithm, which analyzes movement in all directions to “achieve a level of stabilization never before possible with a single device.”

For a closer look at what the Insta360 One X can do, check out this video: 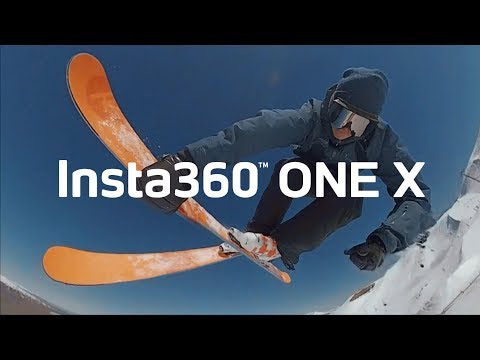 One of the best things about the Insta360 One X camera configuration is it can record every direction at once. That means you miss nothing and have a lot of options when it comes to editing. On the downside, that means you can’t use this as a handheld camera or your hand is going to end up being awkwardly placed in the images and videos.

This is what happens when you try holding it without a selfie stick..

You can place the camera on a flat surface but it works best when used with a selfie stick, tripod, helmet mount, or some other method of holding the device. Unfortunately, this detracts from the portability of the camera, because you have to drag a massive selfie-stick or some form of mount with you anytime you want to use it.

On a positive note, the Insta360 One X software automatically erases the selfie stick from the image. That means you don’t have to worry about it getting in the way.

In fact, Insta360 uses this as a selling point for its extra-long selfie stick as you can get up pretty high in the air with it — giving you an image that looks like it was shot by a drone. For those in areas that don’t allow drones, this could be a great alternative. Of course, you also might get some odd stares when using this super long selfie stick.

As a small warning, the Insta360 One X doesn’t come with any kind of mount, tripod, or selfie stick in the box. So that’s something extra you’re going to have to buy to utilize the camera. Thankfully their official Insta360 stick costs just $16, though a bluetooth model can be had for slightly more at $22.

While the selfie stick is probably the most obvious accessory for the Insta360 One X, the company offers plenty of different options to take your One X experience. Probably the most unique of these is the Bullet Time handle.

The bullet handle let’s you spin the One X around in a circle and takes the image in slo-mo. The end result is an effect that looks like it was taken straight out of the matrix. This isn’t going to be a must-use feature for everyone but it’s still there if you want it.

Overall, the Insta360 One X has a great camera package and plenty of accessories to take advantage of the camera’s full potential. Just keep in mind battery life isn’t amazing. In my tests I was able to eek out about 90 minutes of use from the 1,200 mAh battery. That’s not a lot of time, so you might want to spend the extra $29 for a spare or two.

Good hardware would be nothing without equally capable software. The Insta360 app makes it easy to edit your 360 degree videos quickly. The app lets you make multi-clip videos, montages, and makes it easy to add special effects and music.

It’s also worth noting that the Insta360 One X camera isn’t just about 360 degree video. Because it captures every angle, you can easily grab multiple angles and turn each one into a 2D video. What makes this so useful is that sometimes the best action is the stuff you didn’t even realize you were capturing.

In addition to all the editing features, the Insta360 app also makes it easy to export your videos and photos to Instagram, Facebook, YouTube, and other social sources.

For the purposes of the review I was forced to use the iOS beta app. The good news is that the Android and final iOS app are coming very shortly and should be there by the time your camera arrives.

It’s pretty obvious that the main audience of the Insta360 One X are those who lead active lives and want to capture their adventures on camera. That said, there are other less obvious uses for the camera.

As a parent of three kids, I loved using this at the park or when on a walk with my children. Or even just letting it record for a bit while we were playing together in the house. It wasn’t to get a 360-degree video of my family, it was to make sure nothing was missed.

How many times have you taken a video of one thing only to watch it later and wonder “what was going on over there?”

Never miss a moment with the Insta360 One X capturing every possible angle.

Not long ago I was looking through old videos when my son was a baby and my daughter was four years old. We were so focused on the new baby that some of the cute and silly things my daughter was doing couldn’t really be made out. With an Insta360 One X camera, I don’t have to worry about missing moments. If my focus is on one specific person or thing, I can rest assured that the camera is missing nothing.

At $400, this is far from a cheap camera but it’s easily one of the best 360-degree consumer cameras you can buy. Probably the only real downside is that you’re forced to use it with some kind of selfie cam.