Google buys HTC smartphone talent for $1.1 billion
Google and HTC have been working closely together for years, and now they're taking the relationship to the next level.

By Jimmy WestenbergSep—21—2017 12:00AM EDT
Google and HTC have been working closely together for years, and now they're taking the relationship to the next level.
Google buys HTC smartphone talent for $1.1 billion 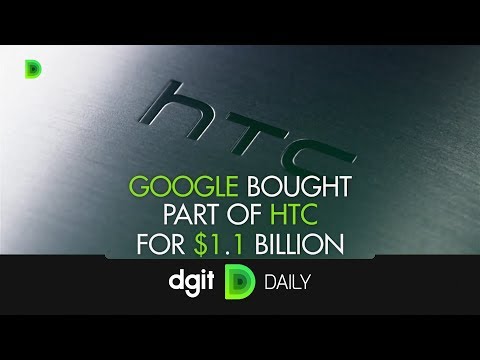 Google and HTC have been working closely together for years, and now they’re taking the relationship to the next level.

Google has just announced that it’s acquiring HTC’s “Powered by HTC” division for $1.1 billion. While Google isn’t buying the entirety of HTC’s smartphone business, the Powered by HTC division will be a huge boon to Google’s smartphone hardware efforts.

Powered by… Google? The Powered by HTC division is the team in charge of developing Google’s Pixel and Pixel XL smartphones, and also makes up roughly half of HTC’s entire R&D team.

HTC will still make smartphones: This isn’t nearly the end of the line for the Taiwanese company, however. Google didn’t buy HTC’s entire smartphone business, and HTC still has plans to develop its own smartphones, including the successor to the HTC U11. In fact, HTC says this deal enables “a more streamlined product portfolio, greater operational efficiency, and financial flexibility.” HTC will continue to grow and develop its Vive VR division.

Google isn’t just poaching the hardware team: This deal also includes a non-exclusive license for HTC’s intellectual property (IP), which will certainly come in handy when developing future smartphones. This allows Google to freely develop its future Pixel phones under one roof, and will allow the company to have more control over the hardware and software. Of course, Google is also rumored to be developing its own SoCs for its smartphones, which would allow the company to have even more control over the development process.

A long history: Google and HTC have worked closely together for years. Not only was HTC tapped to build Google’s first Pixel phones, they actually built the very first Android phone, the HTC Dream (or T-Mobile G1). HTC also worked with Google to build the Nexus One back in 2010 and the Nexus 9 in 2014.

How to steal millions from Facebook and Google: invoice them

Today's DGiT Daily newsletter didn't do a man who stole $122m from Facebook and Google justice. Here's what happened.
Sam MooreMar—25—2019 12:00AM EDT

Here are the best Chromebooks you can buy right now

Considering a Chromebook but not sure what to pick? We’re here to help.
Jonathan FeistDec—29—2018 12:00AM EST

Finding the best 2-in-1 laptops can be challenging because there are so many on the market. If you’re not familiar with all the hardware, making a final, costly choice can be ...
C. Scott BrownSep—26—2018 12:00AM EDT