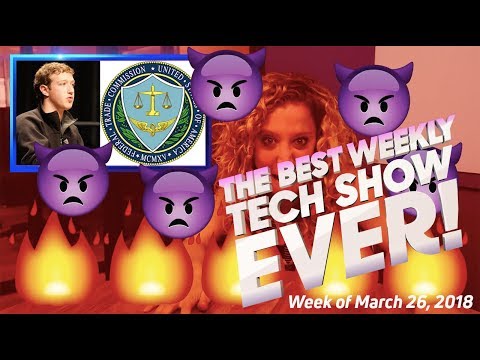 Facebook, Craigslist and more [The Best Weekly Tech Show Ever]
In this week's tech news show we talk about Craiglist removing personals, Facebook and Uber's continued woes, and a really amazing beer-bringing contraption.

By John CallahamMar—30—2018 12:00AM EDT
In this week's tech news show we talk about Craiglist removing personals, Facebook and Uber's continued woes, and a really amazing beer-bringing contraption.
Facebook, Craigslist and more [The Best Weekly Tech Show Ever]

It’s been yet another busy, crazy week in tech and tech-related news. Check out DGiT host Alli Goldberg’s latest breakdown of all things digital, and keep reading for more in-depth coverage of the topics.

This is why we can’t have nice things. Craigslist, the popular website which offered people a way to buy and sell items they didn’t want, also had a personals section where people could hopefully make that special love connection.

Unfortuately, an bill making its way through the U.S. Congress has caused Craigslist to abruptly remove all personals from its site this week, except for missed connections, likely forever. HR 1865, or FOSTA has been voted through by the U.S. House of Representatives and the U.S. Senate. President Donald Trump is expected to sign the bill into law next week.

FOSTA stands for the Fight Online Sex Trafficking Act, and in basic terms the bill could hold websites like Craigslist and others liable for any posts made by its customers that could be for sex trafficking purposes.

In its own brief statement, Craigslist said any of its services or tools could be misused by third parties. The passing of FOSTA convinced the site it was simply too risky to keep its personals section up and running, for fear it could be sued for the illegal acts of others.

This law could affect any site, not just Craigslist. It leaves them open to lawsuits over posts made by third parties. It remains to be seen if the law will indeed be enforced the way Craigslist believes it could. Still, can’t blame them for being a little leery.

Facebook is still dealing with the fallout over the revelations of the Cambridge Analytica data mining scandal. Now the Federal Trade Commission has opened a non-public investigation into Facebook and its privacy practices. If this is resolved, it could happen without any official statements from the FTC or Facebook.

Basically, the FTC is looking into how the personal data of up to 50 million Facebook users was taken by Cambridge Analytica, and if that data collection was in violation of an earlier 2011 settlement between the FTC and Facebook. Back then, the agency said the social network did not keep its customers’ information private. In the settlement, Facebook agreed to ask its users for their permission to send data to third parties, under a penalty of $40,000 for each violation.

If the FTC finds Facebook went against that 2011 settlement, it could enforce the fine. $40,000 times 50 million means, in theory, Facebook could be on the hook for $2 trillion. The fine would never actually be that high, but the FTC could force Facebook to pay hundreds of millions of dollars, if not billions, if it feels this agreement was broken. For its part, Facebook says it is not in violation of the FTC’s settlement, and pointed to Cambridge Analytica’s use of an app that ran contrary to Facebook’s privacy policies to collect the data.

Another tech company that’s been having problems for over a year is Uber. It’s had several different scandals and issues lately, the most recent involving a pedestrian who was killed by one of Uber’s self-driving cars earlier in March.

This week, word got out that Uber decided to cut down on the number of lidar sensors for its newer Volvo self-driving cars, like the one that hit and killed 49-year-old pedestrian Elaine Herzberg. Uber’s older self-driving cars, which were Ford Fusions, had seven lidar sensors. These newer Volvos had only one. Former Uber employees told Reuters the decision actually created a blind zone around the perimeter of the car where it may not be able to detect pedestrians.

Uber has suspended its self-driving car program, and the National Traffic Safety Board is conducting its own investigation. In the meantime, Uber reached a settlement with the family of Elaine Herzberg, but there’s no word on the specifics.

Here’s some news that might put a smile on your face. A developer named Balázs Simon created a DIY project called WalaBeer Tank. He converted a small toy tank to hold a beer bottle and used a combination of an Amazon Echo speaker, a Raspberry Pi 3 PC, and a 3D sensor called Walabot to create this toy truck that can deliver the beer bottle to you with just voice commands.

The WalaBeer Tank can even follow you around the house, just in case you needed that beer right now, but didn’t want to actually hold on to it. It’s silly, sure, but this is just the first step. Remember how a robot made by Mark Wahlberg’s character in Transfomers: Age of Extinction (almost) delivered a beer from the fridge to T.J. Miller’s character. Now we are closer to making movie magic a reality.

That’s all for The Best Weekly Tech Show Ever. We will see you next week with some more crazy, and hopefully less depressing, news.