Last night I made brownies and while finding a recipe, realized that I’d chosen sides in a war I didn’t know was happening: fudgy brownies versus cake brownies. Of course, I’m #teamfudge. You?

👩‍🍳 Here’s the recipe I followed over at King Arthur Flour.

The Apple announcement of declining iPhone sales will reverberate, echo, and shape 2019.

Now we look beyond Apple. What does this mean for Android smartphones, and other electronics and technology companies?

What will be vitally important is that CES is starting next week:

💡 Xiaomi Mi 8 Lite review: Lite, but not a lightweight (AA).

✖ Huawei fines workers $700 a month for tweeting from an iPhone (AA).

📺 Samsung's space-saving monitor can be pushed flat against the wall (TechCrunch).

🍎 From 2017: How WeChat in China makes it easy to switch from the walled garden of iOS (Stratechery)

🍏 It’s not all bad from Apple: Tim Cook says Apple set Christmas Day activations record for iPhones in US and Canada (The Verge).

✨ LG’s OLED TVs have been the benchmark - and now that bar rises: new LG OLED TVs: true 4K/120Hz, variable refresh rates, HDMI 2.1, more (Ars Technica) (Now, there isn’t much to watch at 4K and 120Hz, but future-proofing is always fun)

❄ It snowed in the Arizona desert, and the photos look otherworldly (Earther)

📈📉 Bitcoin turns 10 (The Guardian) ...and those emojis form an accurate price chart.

🔫 The Oligodynamic Effect: How some metals kill off bacteria (Tested)

⌛ You have 24 hours to hide before the whole world starts looking for you. If you stay hidden for a week you get $1 billion. Where do you go and how? (r/AskReddit)

2019: Here’s Cher dealing with accidentally switching her Twitter settings on her account to night mode. And Nancy Sinatra, of all the sweet people, trying to help (Twitter): 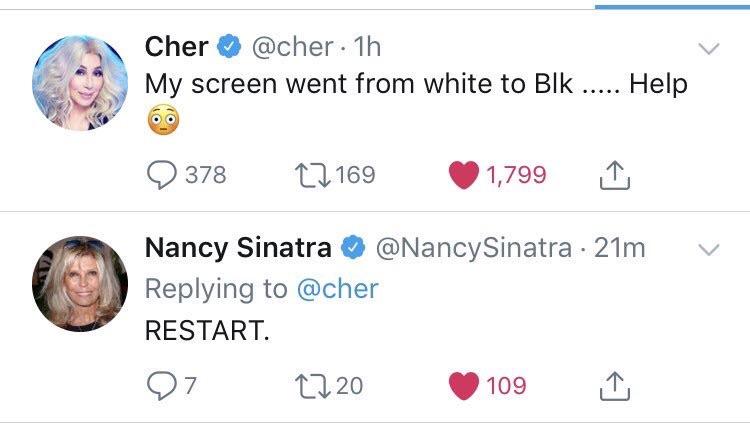 What a world. And as the worst joke from someone on Twitter went: “If only you could TURN BACK TIME to stop it from happening.” Awful!

Enjoy the weekend whenever it arrives - Tristan Rayner, Senior Editor.