Wake up ahead of the curve
Buy now!
PC & Mobile
10 best video editing apps for iPad and iPhone!
PC & Mobile

10 best video editing apps for iPad and iPhone!
Video editing is best done on a computer, where you have more resources and stronger components. However, those looking to edit video on their phone or tablet are in luck because it is possible! Here …

By Joe HindyMay—03—2018 12:00AM EDT
Video editing is best done on a computer, where you have more resources and stronger components. However, those looking to edit video on their phone or tablet are in luck because it is possible! Here …
10 best video editing apps for iPad and iPhone!

Video editing is one of the most difficult tasks for a computer. Naturally, that means it’s also a fairly intensive task for tablets or smartphones as well. Thus, most software companies stay on computers for their video editing apps. It’s simply a better place to do it. There is nothing akin to Final Cut Pro on your iOS device. However, there are some basic video editing tools that do work fairly well. Let’s check them out! Those looking for some excellent video editing apps on Android can click here!

More video editors!
Adobe Premiere Clip
Price: Free / Varies
DOWNLOAD ON ITUNES
Adobe Premiere Clip is a very okay video editor on iPad and iPhone. It does some really basic stuff like cutting, cropping, clipping, adding some effects, and even some audio controls. It also has integration for Adobe Creative Cloud and some other Adobe apps (like the mobile Lightroom app). However, it just doesn't cross line into the realm of professional video editing. This is definitely okay for some basic stuff and those with Adobe Creative Cloud subscriptions may find it useful. There are better options, though.
DOWNLOAD ON ITUNES 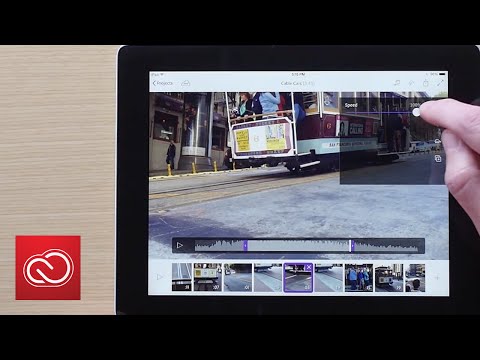 Apple's Clips and iMovie apps
Price: Free
DOWNLOAD ON ITUNES
Apple has two video editing apps for its mobile devices and tablets. The first is the classic iMovie app. It's long been one of the better apps for beginners, simple content, and other basic stuff. Clips adds things like filters, text, music, emoji, etc to already existing video clips. Neither of these are professional quality video editors. However, iMovie gets the job done for that quick video you want to make for social media while Clips can dress up a video clip with some fun stuff as well. They're both free apps with no in-app purchases or advertisements.
DOWNLOAD ON ITUNES
Filmmaker Pro
Price: Free / $5.99 per month / $19.99 per year
DOWNLOAD ON ITUNES
Filmmaker Pro is one of the more popular video editor apps on iTunes. This is one of the few that boast a more professional set of tools. That includes support for 4K videos (on some devices), advanced settings like compression rate, video grading, chroma key support (for you green screen people out there), text overlays, and more. In our testing, the UI is easy enough, though it will take some time to learn how everything works. The app does require a subscription for all of the features. We're not fans of subscriptions, but every app needs a flaw, right?
DOWNLOAD ON ITUNES
LumaFusion
Price: $19.99
DOWNLOAD ON ITUNES
LumaFusion is another powerful video editor. This one comes a little closer to what one would expect from a video editor. It includes three audio and video tracks for multi-clip editing, 4K support, dozens of effects (including chroma keying), layer effects, slow motion and fast motion support, audio effects, and even a small royalty-free audio library. The app costs $19.99 and that may seem steep. However, that is single purchase. There are no subscriptions with this one. It seems to cover all of the bases, even if it's not as powerful as a desktop editor.
DOWNLOAD ON ITUNES
LumaFX
Price: $2.99
DOWNLOAD ON ITUNES
LumaFX is another okay video editor. It doesn't actually let you edit video like some of these other apps. Instead, it adds things like effects. The app also features color correction, distortion filters, customizable presets, support for fast and slow motion (120 and 240fps), and even some super basic animation tools. This is well suited for social media posts and similar cases. Those looking for something professional may need to go elsewhere. LumaFX is also fairly inexpensive at $2.99 for the full version.
DOWNLOAD ON ITUNES
More recommendations from us!
Magisto
Price: Free / $6.99 per month / $29.99 per year
DOWNLOAD ON ITUNES
Magisto boasts about its smart video editing capabilities. It automatically makes videos for you. You choose a style, the various clips and photos that you want included, and then choose music. The app brings it all together in a short clip with all of those elements. It supports up to 30 photos and 25 minutes of footage. The app requires a subscription for most of its best features and we think the price is a tad steep for what it does. However, people seem to really enjoy this one and, honestly, we did too. We're just not sure we'd pay $30 a year for it.
DOWNLOAD ON ITUNES
Splice and Quik by GoPro
Price: Free
DOWNLOAD ON ITUNES
Splice and Quik are among the most popular and best free video editor apps. Both apps are by GoPro, the camera makers. Splice leans toward the traditional video editing experience. It lets you add music to clips, title slides, text overlays, and various filters. Quik is similar to Magisto. It automatically generates completely clips from whatever photos and videos you want. Both apps are entirely free and work well. These are mostly for social media posts or simple YouTube videos. Professionals may want to look elsewhere.
DOWNLOAD ON ITUNES
VideoGrade
Price: $5.99 with optional in-app purchases
DOWNLOAD ON ITUNES
VideoGrade is one of the simpler video editing apps on the list. It's a basic app for color grading. You pop in the clip, use the app's tools to make the colors look right, and then export. It does this mostly with customizable filters. It works for dramatically changing something (like into a black and white video) or smaller changes to improve the looks. Additionally, it includes a color channels histogram, previews, and more. The app goes for $5.99. There are in-app purchases. However, they are optional tips in case you want to be nice to the developer.
DOWNLOAD ON ITUNES
Videoshop
Price: Free / $3.99 per month / $23.99 per year / in-app purchases
DOWNLOAD ON ITUNES
Videoshop is very popular video editing tool. It covers all of the basics, similar to apps like iMovie. You can trip unwanted video footage, add music, add sound effects, and even change things like saturation brightness, or contrast. Many of the features are free. However, some do require the pro version. The developers sell tokens for extremely temporary access to pro features. There is also a subscription ($3.99 per month or $23.99 per year) to get unlimited access to everything. It's okay for what it does and what it costs.
DOWNLOAD ON ITUNES
Vizzywig 2017 4K Video Editor
Price: $99.99
DOWNLOAD ON ITUNES
Vizzywig is kind of like a diamond in the rough. On the one hand, it has some decent features, works well, and has a simple UI. On the other, it's intensely expensive and that honestly makes it difficult to recommend. The app comes with support for 4K and was among the first to do so. It also includes almost all of the basic editing features, some fun stuff like Hollywood style titles and credits, and more. It's actually a fairly decent editor. However, its price tag makes it all but impossible to recommend it to people. You will almost certainly be served well by one of the other nine apps on this list.
DOWNLOAD ON ITUNES

Thank you for checking us out! Here are some last ditch efforts to keep you here for a bit!

If we missed any great video editing apps for iPhone or iPad, tell us about them in the comments below!