Wake up ahead of the curve
Buy now!
The Best
10 best free call apps and websites on almost every platform!
The Best

10 best free call apps and websites on almost every platform!
Everybody makes phone calls. However, many people don't make enough of them to justify a monthly plan. Believe it or not, you really don't need one anymore. There are a host of apps on most …

By Joe HindyAug—10—2018 12:00AM EST
Everybody makes phone calls. However, many people don't make enough of them to justify a monthly plan. Believe it or not, you really don't need one anymore. There are a host of apps on most …
10 best free call apps and websites on almost every platform!

Everybody makes phone calls. However, many don’t make enough to justify a monthly cell phone plan. Believe it or not, most devices have methods to make free phone calls. The calls usually aren’t the very best quality available. They do the job, though, and that’s really all you need them to do. There are a variety of apps and websites that boast free calls. Most of them are garbage and most are just average. We can help you find the good ones. Here are the best free call apps and websites on most platforms! Also, unless otherwise stated, all of these apps let you call people in other countries.

CitrusTel or iEvaphone
Price: Free / Varies
VISIT CITRUSTEL
There are a range of websites that make actual phone calls with real phone numbers. We tested a bunch of them and most of them are trash. Even then, CitrusTel and iEvaphone aren't amazing, but they actually function most of the time. You go to the website, enter a phone number, and place the call. This is good for a quick phone call like ordering a pizza. It's not good enough to replace a dedicated phone plan, but it should work okay for the occasional, short phone call. These sites also have premium options that offer more stability.
VISIT CITRUSTEL
Facebook Messenger, Discord, Viber, etc
Price: Free / Varies
DOWNLOAD ON FROM VIBER
There are a variety of free apps that make phone calls over the Internet. Facebook Messenger, Viber, Discord, TeamSpeak, and many others exist. These don't call actual phone numbers. However, they let you make voice calls (and often video calls) for free. Both people need the app or service for it to work. Thus, you can only use Facebook Messenger to call other Facebook users. It's a little bit limiting, but most people use these services these days. It shouldn't be too hard to find a good one and make calls to your loved ones for free.
DOWNLOAD ON FROM VIBER
Skype or Google Hangouts
Price: Free / Varies
DOWNLOAD FROM SKYPE
Skype is a mix of old and new. It works a lot like Viber, Facebook Messenger, and similar services in practice. You can make free video and voice calls to any Skype member for free. However, Skype can also dial real phone numbers for a nominal fee. It's not free, unfortunately. However, you can pump in only the money you want to make the calls you need and then use the free part of the service for everything else. Google Hangouts works virtually the same way. Voice and video calls are free to other Hangouts members and it can dial a real number (with Google Voice) for a nominal fee. However, Google Hangouts does let you make the occasional free call.
DOWNLOAD FROM SKYPE
TextNow (Windows only)
Price: Free / Varies
DOWNLOAD FROM MICROSOFT STORE
TextNow is a free call service only on Windows 10. You get a dedicated phone number and you can call and text with it. That's about all it does. It looks like any other messaging service in terms of UI. This one just calls real phone numbers. There is a premium service that gives you minutes and credits. However, you can also view video ads and complete advertising offers to earn credits. With enough patience, you can get all the credits you need to make the calls you want. The call quality is pretty decent also. This one is currently only available in the Microsoft Store on Windows 10, but it is available for Android and iOS as well.
DOWNLOAD FROM MICROSOFT STORE 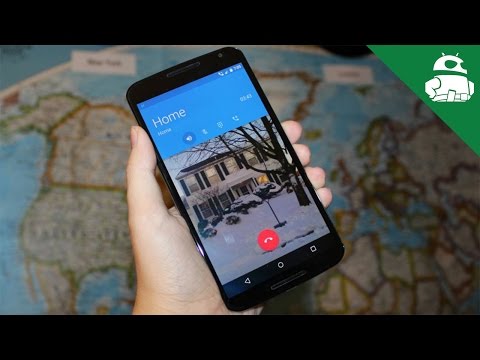 Google Duo
Price: Free
DOWNLOAD ON GOOGLE PLAY
Google Duo is Android's version of FaceTime. It lets you make video and voice calls for free to other Duo members. However, Duo is also available on iOS whereas FaceTime isn't available on Android. That makes Duo the better option for free calls. It links to your Google account and it's easy to use. We prefer Google Hangouts, but Google is insistent on going in this direction. Thankfully, Duo's call quality is excellent for both video and audio. It's also entirely free with no hidden fees. It's also compatible with all Google Android phones. This won't work on your Amazon Fire tablet or some Chinese Android phones.
DOWNLOAD ON GOOGLE PLAY
GrooVe IP
Price: Free / Varies
DOWNLOAD ON GOOGLE PLAY
GrooVe IP is a call service on mobile. It calls actual phone numbers and sends actual text messages. It's very similar to TextNow. There is a premium service where you buy and use credits. However, you can watch video ads and compete advertising offers for free credits. You can make all the calls you want to if you have enough patience for that kind of stuff. It's good for ordering the occasional pizza or something like that. It's not good enough to replace a phone plan on its own. It might be good enough to do so when used in conjunction with something like Facebook Messenger or Google Duo for the free voice calls from those services.
DOWNLOAD ON GOOGLE PLAY
WhatsApp, Facebook Messenger, etc
Price: Free (usually)
DOWNLOAD ON GOOGLE PLAY
The same list of suspects for the PC, Linux, and Mac section appear here too. WhatsApp, Facebook Messenger, Viber, Kik, Line, Discord, Skype, Hangouts, etc all have mobile apps as well as desktop apps. They allow for free, unlimited calling between two members of the same service. Thus, if you can get your friends and family on one of these, you can call them for free in perpetuity. They also provide texting, media sharing, and each one has its own set of additional features. They're usually free to use. Some of them include little extras like sticker packs for a nominal fee. This is probably the best, most efficient way to call people, but not businesses.
DOWNLOAD ON GOOGLE PLAY

Facebook Messenger, Duo, etc
Price: Free (usually)
DOWNLOAD FROM THE APP STORE
We assume nobody reads the whole list, so we're recommending these apps one more time. They work on Android, Mac, Linux, and Windows. Thus, it's a safe bet that they work well on iPhone and iPad as well. The apps are basically all the same as the Android versions. They let you text and call members of the same service for free. Thus, you can conduct unlimited phone conversations over Facebook Messenger for free. It's good for loved ones. However, none of these call actual landlines. Thus, they're not great for ordering pizza or calling your bank.
DOWNLOAD FROM THE APP STORE
JusCall
Price: Free / Varies
DOWNLOAD FROM THE APP STORE
JusCall is a lot like GrooVe IP on Android or TextNow. It's a call service with support for actual phone numbers and text messages. It works on a credit system. You can pay for credits as needed. Another option is to watch video ads and fill out offers to earn free credits. It has the same pros and cons as most of its competitors. You don't earn that much through advertising. However, it's enough to make the occasional phone call. This alongside something like FaceTime, Duo, or WhatsApp should get you everything you might need if you don't make frequent phone calls.
DOWNLOAD FROM THE APP STORE
Talkatone
Price: Free / Varies
DOWNLOAD FROM THE APP STORE
Talkatone is just like JusCall, TextNow, or GrooVe IP. The app gives you a U.S. phone number along with some credits. The credits let you call or text whoever you want. The credits aren't overly expensive. You can also earn them with video ads and advertising offers. This one even boasts support for iPods. There are some subscriptions as well. For $12.99 per month, you can get unlimited calls all over the world. The UI is fine and the call quality is acceptable. It's not perfect, but it gets the job done.
DOWNLOAD FROM THE APP STORE

If we missed any great free call apps for any platform, tell us about them in the comments! You can also click here to check out more of our app stuff!

The stock music app for iPhone and iPad gets the job done, but there are plenty of options for those of you looking for something more interesting.
Joe HindyApr—29—2019 12:00AM EST

What is an applock? Do you need one? We can help answer those questions! Here is what an applock really is and whether or not you need one!
Andrew GrushJan—12—2019 12:00AM EST

Wondering how to delete your app backups from iCloud? We've got you covered.
C. Scott BrownDec—06—2018 12:00AM EST

5 best find my phone apps for iPhone and iPad

Losing your phone or tablet is one of the most terrifying things that can happen. These things are expensive, after all. However, there are some things you can do about it. Here are the ...
Joe HindySep—13—2018 12:00AM EST