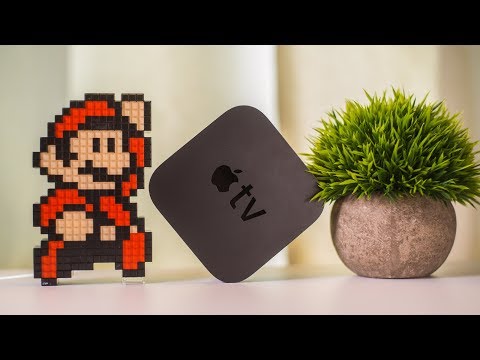 By DGiTNov—16—2017 12:00AM EST
In the face of ever growing competition and cheaper alternatives, is the latest gen Apple TV worth it? We find out, in this Apple TV 4K review!
Apple TV 4K review – Should you buy it?

Set top boxes like the Apple TV have been around since 2008. With growing competition and cheaper alternatives available from Amazon, Google, and Roku over the last couple of years, Apple really needed to step up their game in this space. They certainly seem to have done so, with the new Apple TV 4K. What does this device have to offer? We find out, in this Apple TV 4K review!

> Media streaming devices – what are your choices?

Even if you’ve never owned an Apple TV, you are probably familiar with what it can do. What makes the latest iteration different though is the extremely high resolution video that it can stream.

The “4K” in the Apple TV 4K name is for the size of the picture that it can create now. Compared to the previous standard of 1080p, the picture is now twice as wide and tall, and four times as big. The term 4K comes from the number of vertical lines used to make up that image.

Another new feature that Apple TV 4K has is the ability to stream TV shows and movies in HDR, which sounds similar to HD or UHD. However, while the latter has to do with the size of the picture, HDR refers to the color and quality of that image. So with 4K and HDR on the Apple TV, you’re not only going to see a bigger picture, but also brighter colors and more detail. You can find more information about HDR here.

There is now a lot of 4K HDR content available on iTunes for you to stream with the Apple TV 4K. They are even updating some older movies like The Bourne Identity and Spiderman. If you happened to have bought these movies a while ago, iTunes will automatically upgrade it to the 4K version for free.

Buying a movie on iTunes provides everything you’d get if you had bought a DVD or Blu-Ray copy of the movie instead, like deleted scenes, director’s commentary, and other extras and featurettes. What doesn’t feel like a DVD copy though is the fact that you won’t be able to play the movie without internet. If the speed of your internet connection isn’t up to par, you won’t get that 4K quality either.

Netflix offers some 4K HDR content as well. However, it is currently limited to Netflix originals and Marvel shows like Jessica Jones and Luke Cage. Of course, you will also have to upgrade to the premium subscription to stream in 4K HDR.

Unfortunately, there aren’t a whole lot of options available if you’re hoping to stream free 4K HDR content on your Apple TV. 4K video playback on the Youtube app isn’t supported yet either. So the device will stream the video at 1080p and stretch it out to 4K, which doesn’t always look great.

Like most of the other set top boxes currently available, the Apple TV 4K allows you to search for content with your voice. It features a universal search, which means that the device can search third party apps as well to find the show or movie you are looking for.

The voice functionality also has nice context recognition built in. For example, if you say “Who is in this?” while watching a movie, a cast list pops up. Another question you can ask is “What did they say?”, which will rewind the video by a few seconds and turn on subtitles.

Another very useful voice function is the ability to use your voice to spell out your password. Anyone who has used a set top box like this before will know how annoying it can be to type something using the on-screen keyboard. It is really nice to be able to speak and speed up that process.

The Apple TV comes with a remote that is very simple and easy to use. It is quite small, and I’ve already had it disappear between my couch cushions a few times. If you are worried about misplacing the remote, the good news is that there is an Apple TV remote app available for your phone that works the same way.

I like that there is a volume rocker on the remote. It may seem like a small thing, but most of the other set top boxes don’t have that, which means that you will need a second remote to control the volume of the TV.

The remote comes with a touch sensitive top portion which is what you use to control everything on the Apple TV. This is a nice alternate to a D Pad, and you use swipe gestures to navigate around the interface instead. I found it to be a little too sensitive though, and I often ended up swiping past the point I wanted to get to.

One of the more surprising video apps was Facebook. It was unexpected to see full episodes of their own content to watch, and of course, there are the videos uploaded or shared by your friends. Also available are 360 videos that you can control using the touchpad, allowing you to look around a scene in a VR-like way.

The Twitter app is also pretty cool. It lets you see a full map of the world and where all the live streams and periscopes are coming from, so you can click around and tune in.

Another feature I like is that the timeline at the bottom of the video doesn’t just show you how much time has passed and how much is remaining. It actually also shows you that information with regards to the time of day, so you know what the current time is and when the video will end.

If you’re feeling too much like a couch potato and watching TV for hours, you can work out with the Apple TV 4K as well. The device also supports connection to heart rate monitors, so you can keep a track of how you are doing while exercising.

Although video is king here, music is also a huge part of the Apple TV experience. You can play music from your iTunes library, Apple Music, various podcast apps, and more. What is nice is that regardless of what music you are playing, you can continue through the menu navigation and the song won’t stop until you start to play something else. Despite the suspicious absence of Spotify from the Apple TV app store, you can always play music straight from your phone using Air Play.

There are a few shopping apps available too, like QVC, Zappos, and Amazon. The AirBnb app doesn’t let you book anything, but you are able to favorite and save locations that you can later book using your phone. Another odd app to have on your TV is Tinder, which I guess allows your friends to have a say when it comes to swiping left or right.

As if there isn’t enough to keep you glued to your Apple TV already, there are also a lot of games available. The ones that I really enjoyed include Labyrinth, which leverages the gyroscope of the remote to control it. Another game called Sky Force looks absolutely stunning in 4K.

As we’ve come to expect from Apple products, the build quality and user experience scores are really high. Unfortunately, so is the price point. At $199, the Apple TV 4K is two to three times the price competing devices like the Amazon Fire TV and Roku 4K TV.

On paper, it looks like Apple products offer exactly the same specs and features as its competitors but at a much higher price. Some of it does have to do with the brand value, but what you can’t see on paper is the user experience. Using the Apple TV 4K is just really pleasant and feels like a luxury device. Admittedly, if you are someone who doesn’t use Apple products, the Apple TV 4K may not be for you. However, if you are already invested in the ecosystem, this device is certainly very impressive.

What did you think of our Apple TV 4K review, and of Apple’s latest streaming box? Let us know down in the comments.

With categories including movies and TV, education, music, workout apps, food apps, and games, we take a look at some of the best Apple TV apps you can get.
Ankit BanerjeeSep—11—2018 12:00AM EDT

Best media streaming players – which is right for you?

Not only are there tons of streaming media devices, there are several different platforms to choose from. But which one is the best for you?
DGiTFeb—10—2018 12:00AM EST

How to reset Apple TV